Undoubtedly, one of the fundamental aspects for the correct functioning of the PC resides in an effective cooling of each of its components, since in this way the equipment will not generate an overload of heat that many times can damage the computer. hardware.

With good cooling, we will not only be able to make our computer work more comfortably, a point that we will notice in its daily performance, but we will also extend the useful life of all the elements that make up our computer equipment, avoiding the wear and tear that occurs when the PC works too hard. 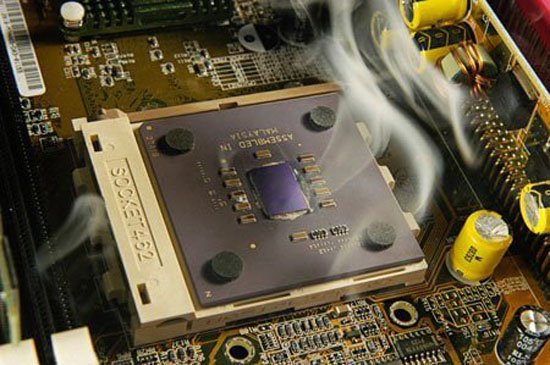 How to cool down the PC

However, it should be noted that to choose which is the adequate cooling for our computer, in principle we must take into account what type of use we are going to give our PC, since it is not the same to achieve adequate ventilation for a computer in the that only computing tasks are carried out, than a computer that must remain for a long time processing large volumes of data. If ours is a case in which we will use the PC for office tasks, the ventilation with which the equipment came from the factory will suffice.

If, on the other hand, we require a powerful team to carry out multimedia work such as audio or video editing, or run applications that make intensive use of components such as the video card or hard drives, or systems that remain running for many hours, then we must place great emphasis on cooling, so that the temperature levels inside the PC cabinet are adequate. 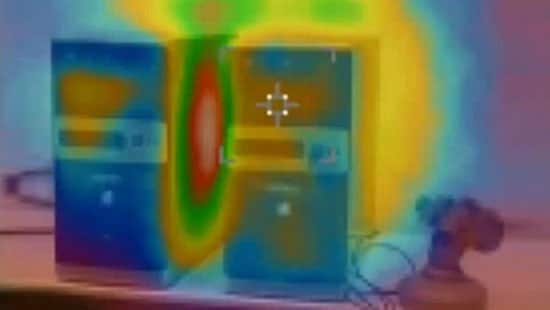 This point is even more accentuated in those cases in which users use the computer to play games that require a high level of processing power, such as virtual reality games, for which these users often perform the so-called “Overclocking “, which requires much more significant PC cooling.

It is also important to define if we are looking for a computer that does not emit too much noise, or if the fact that it is a very noisy PC does not bother us when carrying out our tasks.

All these details must be taken into account when choosing the corresponding cooling that our PC must have in order to function effectively. If in our case we require superior ventilation because we use the PC for large volumes of work, in this post we provide you with the basic guidelines for choosing the most appropriate ventilation for our computer. 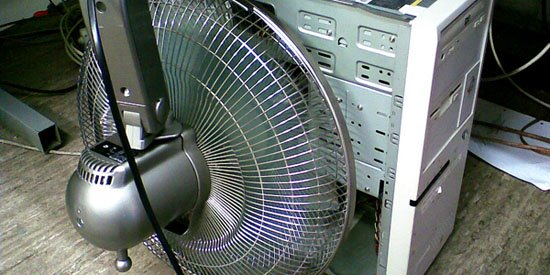 To keep our PC cool there are different methods, among which we must choose the most appropriate for our case. The types of cooling that are commonly used are active and passive ventilation, which in turn can be air or liquid.

The computers are cooled with the active method by air are those using a cooling system generally comprises dissipators and fans placed at key elements typically generate much heat. 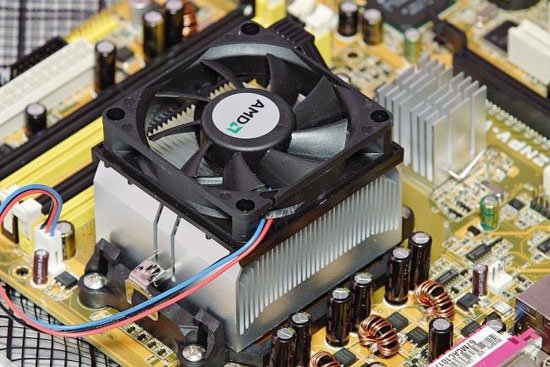 In this type of cooling, the fans fulfill the function of cooling the heatsinks, extracting the heat generated by them. In this way, specific components, such as video cards, hard drives and other devices, manage to maintain a suitable temperature during their operation, thus improving the general performance of the equipment.

Another variant is passive air cooling, ideal for those looking for a silent computer, since this type of system is composed only of heatsinks that cool themselves by using liquid metals inside, which circulate constantly thanks to the work done by an electromagnetic pump. Although this is one of the most efficient and silent methods, heatsinks of this type have a very high price, and are often not available to the common user. 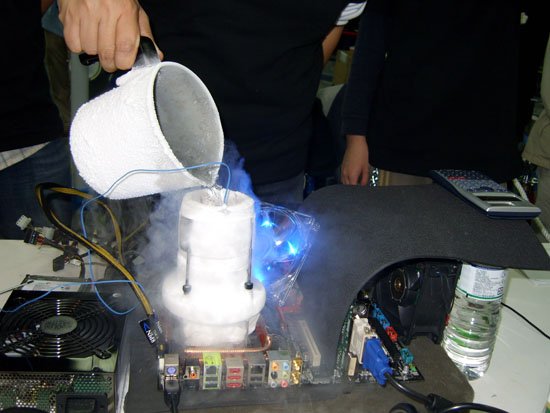 On the other hand, there is also passive liquid cooling, also called “Watercooling”, which disperses the heat generated by the components through a system of heatsinks that work with a water circuit that runs through them using a pump that circulates the liquid, achieving in this way to cool the elements. It should be noted that this is one of the quietest methods, since heatsinks of this type are equipped with very subtle operating pumps.

There is also another method called active liquid cooling system, which although it is basically built like the previous one, in this case the heat that has accumulated in the heatsink is extracted by a fan placed on the heatsink. 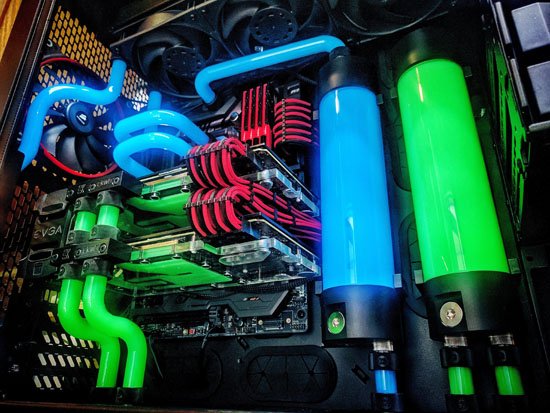 This system achieves a balance of temperatures between the components and their environment, and thanks to its effectiveness this method is commonly used by those users who perform overclocking to achieve a performance of the computer or the components superior to those provided at the factory.

What parts of the computer need to be cooled?

In a properly ventilated computer, it should be borne in mind that its most important components must be well cooled. The elements that we must maintain at a good operating temperature to get the most out of our computer are the processor, the hard disk, the video card, the motherboard chipsets , both the Northbridge and the Southbridge, and the Mosfet semiconductors.

Each of these components requires specific ventilation so that they do not reach a temperature that is too high when their use is extreme, when for example we perform overclocking, since the fact that they are not properly cooled causes irreparable failures in the elements. 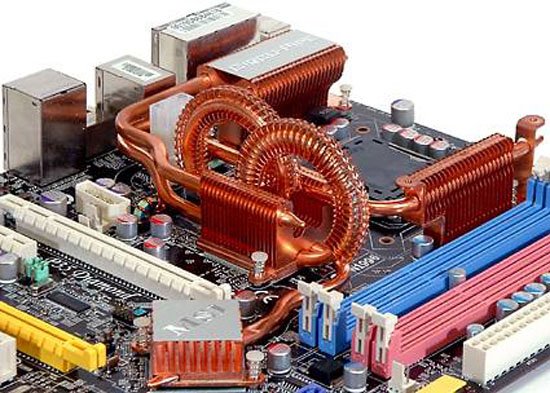 As for the video card, it can be passively or actively cooled, although in general in most of the lower-range cards, active ventilation is used, consisting of a fan arranged on a heatsink , and in turn both elements, placed on the GPU. Another degree of sophistication is observed in higher-end video cards, where passive ventilation is generally used, that is, without a fan , which makes it more silent.

With regard to the processor, since it is the most important component for the operation of the computer, it is extremely important to keep the processor well cooled, so we should not neglect this point. 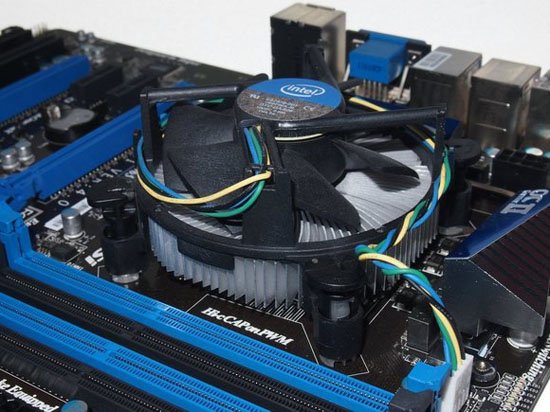 If in our case we have an Intel or AMD brand processor, it is advisable to change the cooling fan that comes from the factory mounted on the heatsink, if what we want is to overclock or obtain a quieter computer, since generally this type of fans they are quite standard, and are not prepared for this type of operation.

For a good ventilation of the processor of our computer, three methods are recommended: watercooling, passive cooling or active cooling . The watercooling system is undoubtedly the most expensive, since for its correct operation it is necessary to have quality elements. 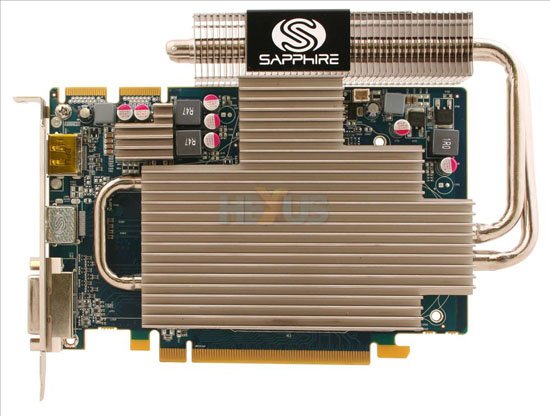 To obtain a completely silent computer, the best alternative is passive cooling, since it does not use fans, while for overclocking it is best to use an active cooling system.

Is it necessary to cool the chipset?

In most cases, cooling is carried out through passive systems with a factory installed heatsink. If we are interested in demanding the maximum performance of our equipment, for example by overclocking, then it is advisable to incorporate a good cooling system that covers the largest number of components, so that the entire system works in a more balanced way.

Basically the same thing happens with mosfet-type semiconductors, electronic components located near the location of the processor, which during overclocking can overheat and explode if they are not properly ventilated. 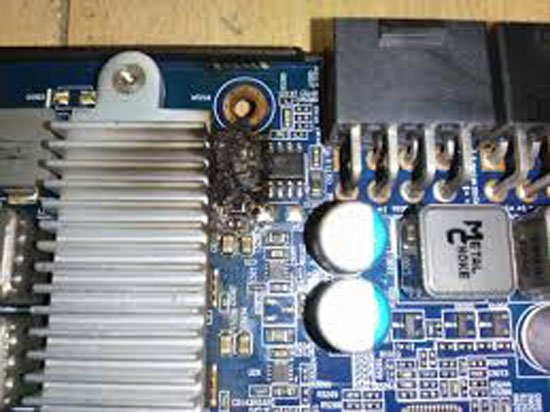 With regard to the hard disk, because some models of storage units tend to overheat when many hours of operation are required, it is advisable to carry out adequate ventilation through a watercooling circuit or fans, according to our needs.

How to keep your PC case cool

One of the most important points to take into account to carry out an adequate cooling of our computer, is undoubtedly the distribution of the elements within the PC cabinet, since a good structure will collaborate with our objective of lowering the temperature and reduce noise. 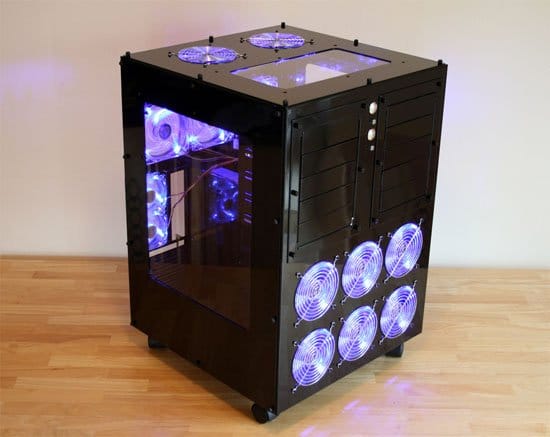 In principle, let us bear in mind that the size of the cabinet is essential to achieve correct heat dissipation. If we have a spacious cabinet, in which the components are properly separated from each other, allowing a correct air flow , we will achieve that the air inside it circulates without inconveniences.

Another significant aspect of good refrigeration inside the cabinet is the distribution of the wiring, which must be well attached and organized in order not to obstruct the passage of air.

In order to adequately cool all the components within the PC case, various strategically placed fans can be used, which will serve to expel hot air and introduce fresh air from outside. Keep in mind that hot air rises and cold air descends. This is a point that we must bear in mind when placing the fans inside the cabinet. 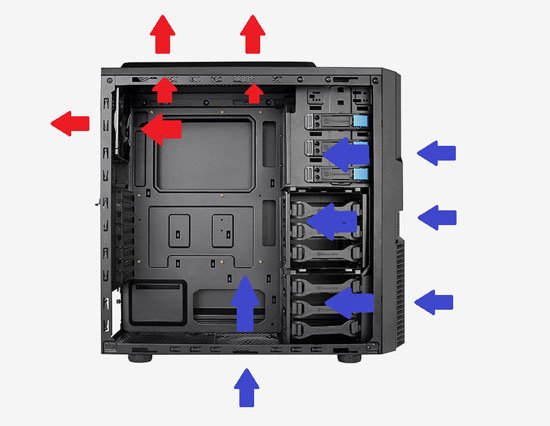 In general, the best way to place the fans to achieve optimal ventilation of the PC is to place fans in the front of the case, which will be responsible for introducing cold air, and one or more fans at the back of the case that will extract the hot air. Also, according to the cooling configuration that we want to obtain, fans can also be placed on the side and on the top of the cabinet.

Another thing we can do to maintain good airflow inside the cabinet is to clean the interior and keep it clear of dirt and obstructions.

How to cool a notebook

As we know, overheating a notebook is not something to be taken lightly, as excess heat could seriously damage it to the point of rendering it unusable . The issue of heat generated by a notebook should concern us from the moment of purchase.

Some of the most common symptoms that our laptop is suffering from stress due to excess heat in its interior is the appearance of black screens, crashes and repeated reboots of the system. 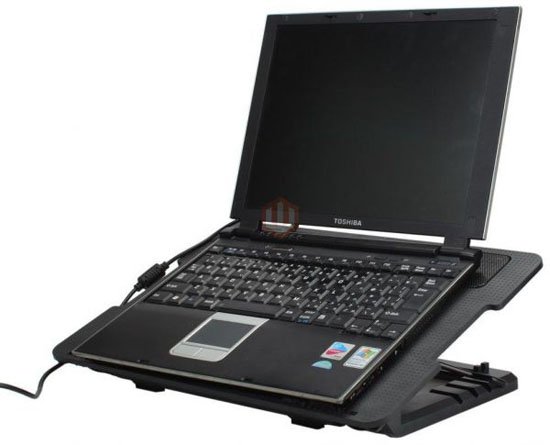 What can be done if our notebook gets too hot? Unfortunately there is little the average user can do to prevent their notebook from heating up. However, there are some accessories that allow us to control the temperature of the laptop to avoid overheating without us noticing.

One of these accessories is the bases that include a fan, which is a pretty effective way to keep overheating at bay. 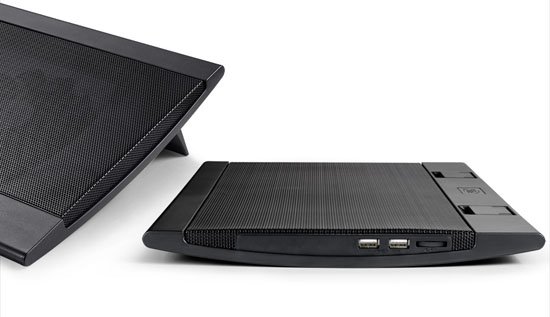 Another interesting accessory to take into account are some rubber feet, which we can stick to our laptop to keep it away from the surface on which it is resting, and in this way allow a greater flow of air under the device. It is also helpful to keep the laptop clean and with the ventilation slots clear.

If we take these ideas as a habit, our notebook will always remain at normal operating temperature levels, which will guarantee us years of use.

The motherboard of a computer

What is overclocking? How to do it?